Several years ago, when I was pregnant with Layla the sewing bug bit me. Hard. I got out my sewing machine and, well, I haven’t stopped since. Its been a daily part of my life. Those pregnancy hormones really induce a serious crafty nesting mentality in me.

This pregnancy gave me pause on that front for a while. I mean, Wallace won’t even be two years old when his little brother arrives, and I don’t feel much need to sew many things for this little man. Sure, I’ll make him a quilt, and maybe some crib sheets. But I’m not going to go crazy because practicality prevents me from doing so.

And then it occurred to me, I can knit some things! No, I haven’t ever actually made anything, but now seems like the perfect time to go from knitting and purling enormous swatches to making useful things. So after a little browsing on the Purl Bee, I decided I needed to make a hat. No, I needed to make ALL the hats. Probably one in every color combination. You know, because we get alot of use of winter hats in Southwest Florida during one of our four seasons of summer.

Okay, so pregnancy erases some practicality.

But I still had to make a hat. I consulted with my many knitty friends on Instagram. I told them I had a size 8 circular needle, Purl Mulberry Merino, and I didn’t have a clue what pattern I could make with that. A friend pointed me to the Barley Hat, and I got started. Its about 10 am on a Saturday morning. 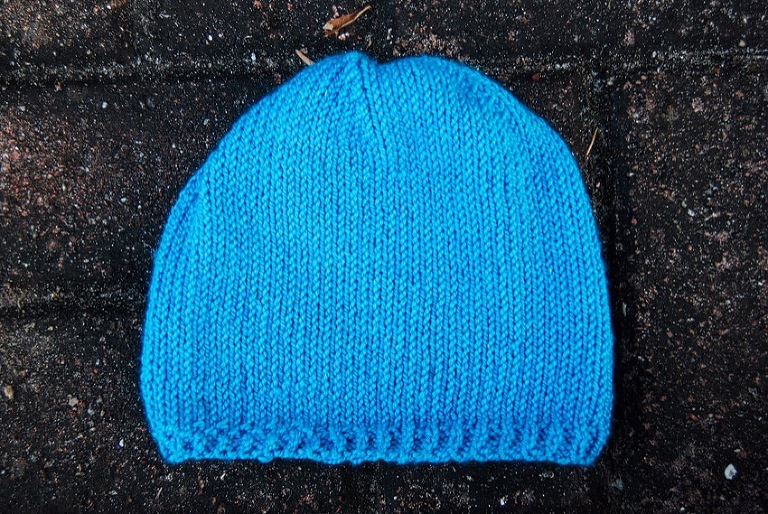 I sat in that exact spot until after 11pm (I did get up for bathroom breaks, and to feed and tend to my children), until the hat was finished. I did not have multiple circulars for magic looping, nor did I have any double pointed needles, so I just worked the heck out of that round one until I could no longer shift stitches, then I finished up the top. 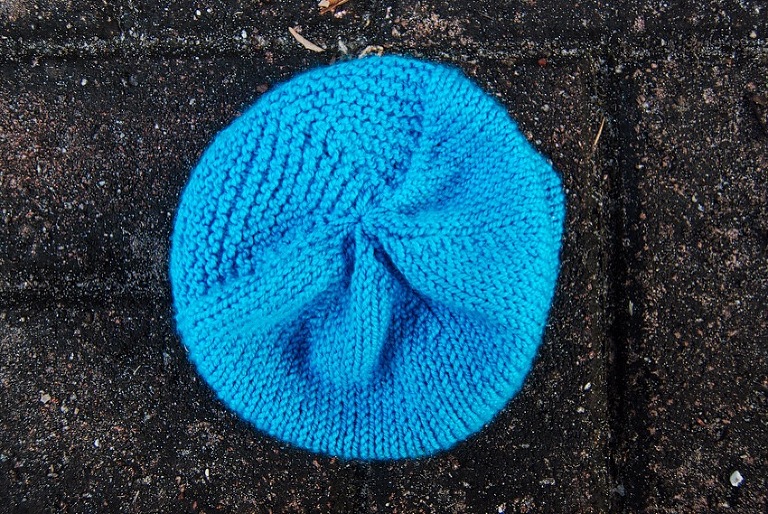 I had never done knitting and purling in the same row before, but I did for this hat. Of course I started with ribbing, which you can see is, um, a little messy. I was losing track of the number of stitches because I was mothering at the same time. I have since found out that is one sort of multitasking I’m not great at. 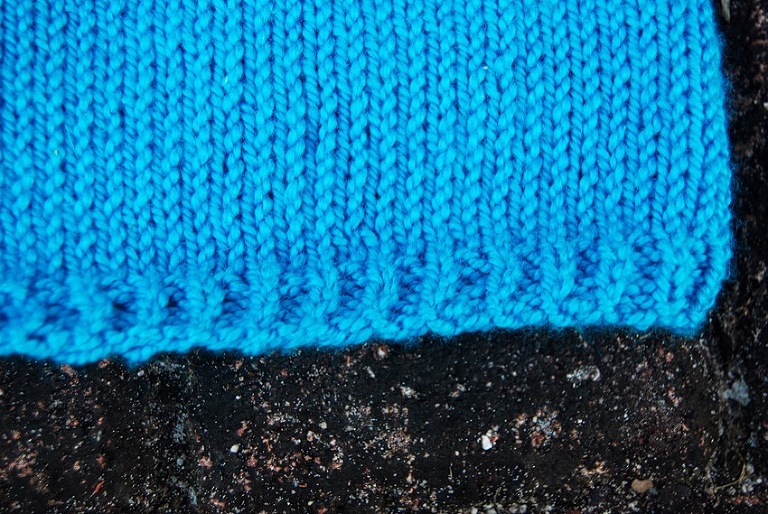 I also must have dropped a stitch or two at some point. I decided that even though the hat isn’t the prettiest thing, I am going to keep it just like it is. It is my very first project and I’m so happy I went for it. It gave me the confidence that I could learn and get better. I made this hat for Layla, and she just loves it. She’s worn it a few times in our 90 degree heat, so I’m sure we’ll see it many more times through the cooler days.

I got it so bad [the urge to knit], I actually ordered some more yarn from Purl to make some of these hats. Obviously I needed some color variety because one tone hats just wouldn’t do. I was told during my first knitting project that I needed to ball the yarn, but I don’t have one of those things that does that. So a good friend generously offered to do it for me on her machine. My intention was to basically receive the new yarn then send it onto her, and then make things when I got it back. That really was the plan, okay? 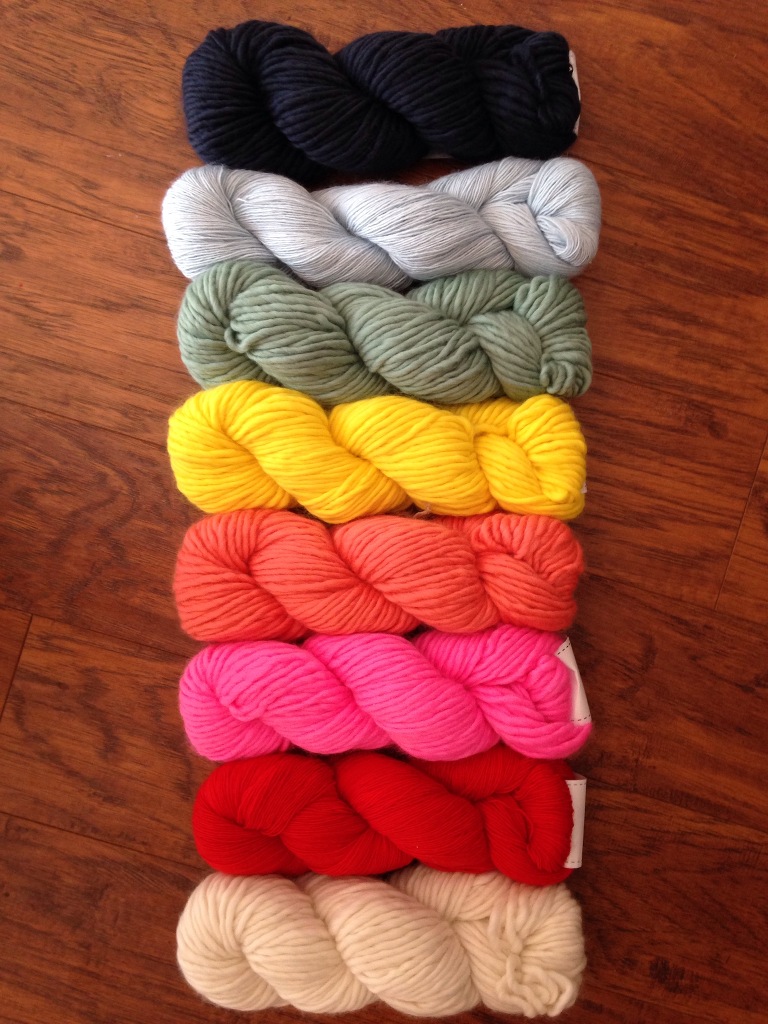 But then the following Friday, I think the day after I received the yarn and couldn’t stop looking at or touching it, I had been so very diligent about finishing all my Market prep items, I just had to make a hat. I just had to. So at 5pm I sat down with my Super Soft Merino in Heirloom White, Super Pink, and Pink Grapefruit and started stitching. 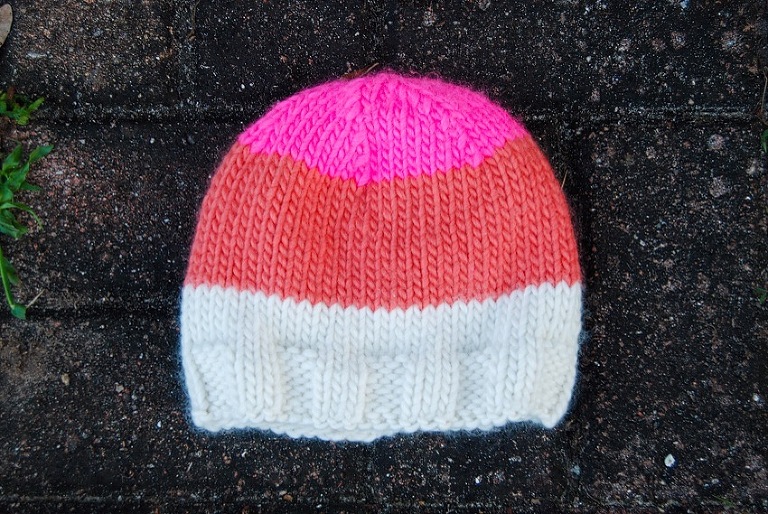 I really liked the thick ribbing and thought it was easier to keep track of because I could just count to three over and over. The color changes were also easy, the hardest part was retwisting each color into a skein. 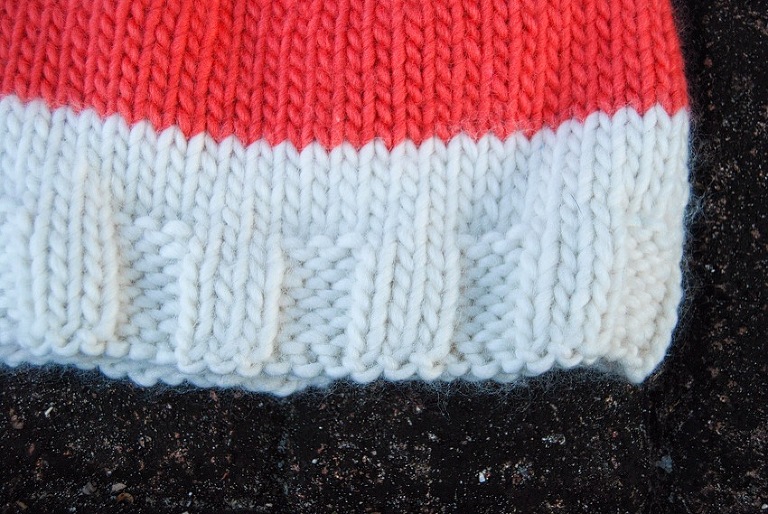 For this project I had to add a needle size to my one-size collection. I used a coupon and got two circular size 11 bamboo needles from Michaels, one in 16 inch and one in 36 inch. I was warned against using DPNs, so I grabbed the large one for magic looping, which is actually similar to what I did with the first hat. I think the method is pretty much the same as DPNs, you just lose that risk of the stitches falling off. It took a while to keep transferring stitches, but I’m sure I saved time by using the circulars. And I was able to decrease to the point I was supposed to and then tie up/bind off the hat! Look how much better the top of this one looks! 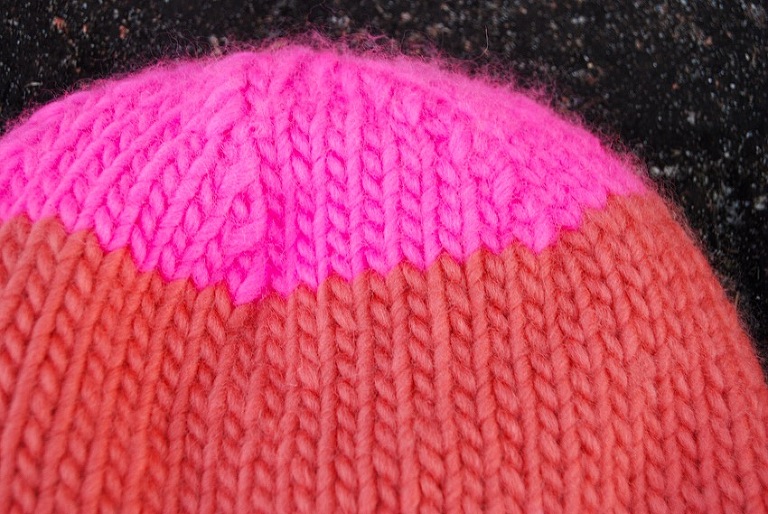 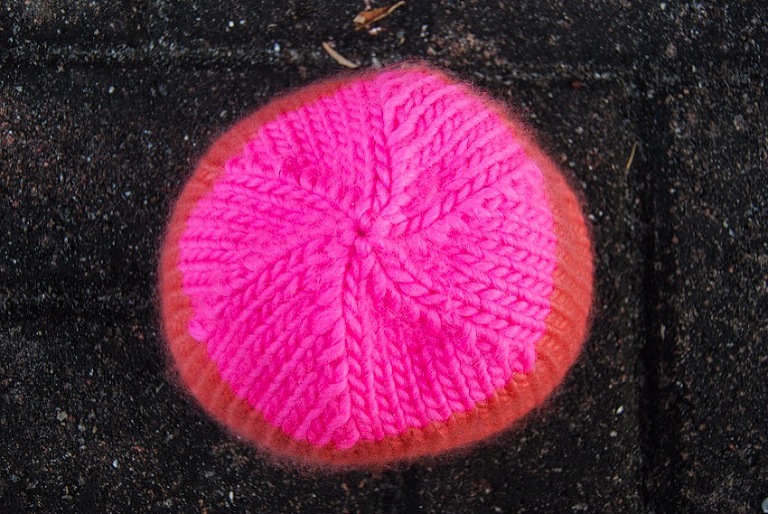 Its so squishy and awesome, and even though I have never owned a hat like this, you better believe I will be rocking it this winter. Its a little snug. I made the women’s size and I have a small head. Regular hats never fit me, so I’m thinking that either the stitches will loosen, or I’m a tight knitter?

Anyway, I’m going to get a few more of these under my belt once I get the yarn back, and then I’ll try a cowl. I want to make the baby some hats and I want to work my way up to line weight so I can make a hat or two like this. I think it will be a lighter weight and practical for longer wear here. But who knows, it may just be cool enough in February to warrant a super soft merino hat or two as well!

I’m so excited about this new adventure! I see it being my weekend treat for the foreseeable future.

Thanks for stopping by and letting me gush on!