It has been quite a day. I spent Monday evening cutting out templates and fabric to make the Teddy Bear from Joel Dewberry’s book, Sewn Spaces. I had planned on that being a good Layla and Mommy project for today. I decided when I got up this morning I would read over all the instructions and tackle any of the difficult stuff prior to having Layla help me.

No part of this project was easy for me. I think the pattern was poorly written, leaving out many crucial details, and the pattern pieces were marked incorrectly leaving it to me to figure out which side was the front and back (They were both marked “back”). Also, there were no clear markings showing where to stop and start stitching, which I found very irritating. The pattern required darting several times, and the pocket indicated it needed darting, yet once I did it, it did not fit on the bear and had to be elimated from the project. The last problem I had was that the feet pieces are too large for the feet, so I had to eliminate those as well, and give my bear flat feet. Clearly, the bear in the book was made differently from the way the instructions state it should be done. 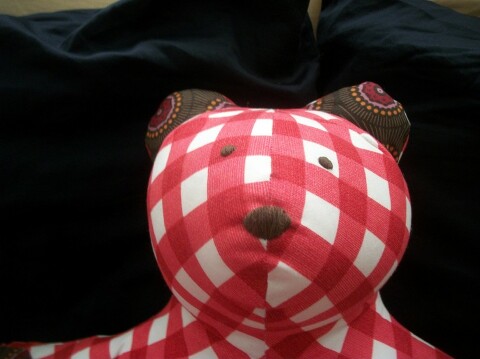 I did trudge through, and eventually finished the bear. Layla loved it immediately despite its many flaws. I guess I just had a rough time with it because I’m so used to following crystal clear [mistake free] instructions from people like Liesl Gibson, and Anna Maria Horner. I don’t want to knock Joel Dewberry, as I love his fabric and I know he is quite a talented artist, I just think this should have been tested out more prior to publishing. 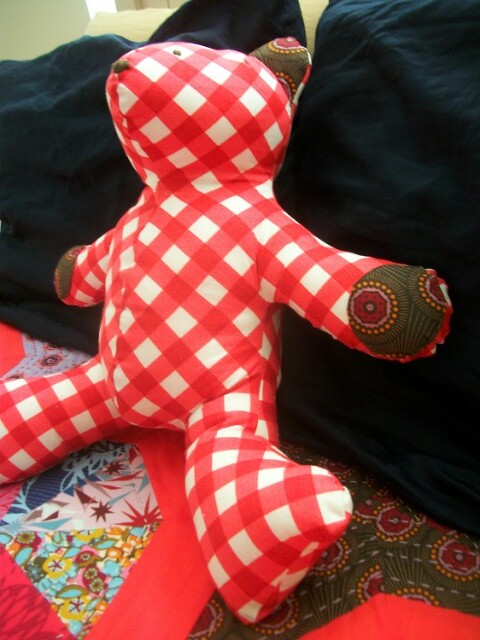 Mr. Bear is quite cute, and I’m sure he will be well loved even if he doesn’t look just like the one in the picture.

After that charade, I went to the doctor. It took some convincing before Layla realized we weren’t going to her doctor and she didn’t have to get a shot. I told her Mommy’s doctor was the one that helped her get out of my belly. The look on her face summed up her thoughts perfectly, and it went something like this, “I so did not come out of your belly. Have you gone crazy, Mom?!” She was in utter disbelief that I would imply such a thing.

After we got home, Emilee and I walked down the street to collect some tadpoles for Layla to observe. She watches Curious George, and he got to catch tadpoles, so I thought Layla would enjoy getting to see them in real life. I must say, catching those little things is way harder than it was when I was younger. They are speedy little boogers. After many, many attempts, I managed to capture two, and they will be living on my parents’ lanai until they sprout legs. It will be so much fun to watch Layla learn all about frog growth.

Well that is all I have for you today. I hope all is well with you and I’ll have more for you tomorrow!