Quilting outside the box 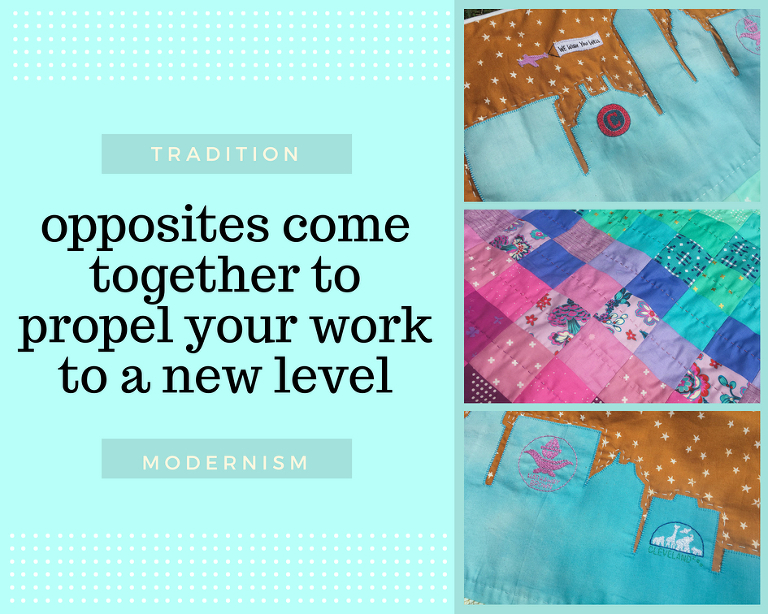 Quilting is an art form. You can stay within the safety net of tradition and make stunning quilts to use, to hang, whatever! Then there are those works that bend the rules; like so much of the motto of “modernism” its effect on quilting is no different. Some may find this translates into an improv-only approach, and I have to admit that until the last few years, I think I would have thought the same thing. You see, as I’ve stated here before, I tend to be a creature of habit. I’m pragmatic by nature, and unless an opportunity presents itself, I will often stay within the confines of what I know works. Tradition becomes so for this reason- it works.

But I’ve learned something. Tradition in method is a beautiful foundation for creating way outside the realms of what is “normal”.

Earlier in the month, I was presented with a commission that initially had me scratching my head. Instead of just doing a brief show-and-tell, I thought you might like to take a deeper look into my process. I feel like I’m evolving in the way I do things and in the overall appearance of my work, so this is a great time to talk about it, and I’d like to challenge you as well. I hear so many people say they get burnt out and will leave projects in process for years before completing them because the inspiration is lost. Perhaps a different approach is all you need to get you back in the sewing saddle!

Having worked with this client for years, she knows my approach. Give me some ideas and I’ll go from there. Sometimes its just a color, other times its a theme inspired by name or place like this quilt, or some other thing. She was working with another mother to get a quilt made for a teacher that is leaving after this school year.

Okay, so two people who think differently. Not what I’m used to, but definitely excited.

My list of ideas/requests: the color aqua, Harry Potter, the school seal, Cleveland Skyline, a non offensive Indians logo, the zoo, and cats.

Initially, I thought simple patchwork was the solution, and I could embroider these various elements into blocks. It would work, but how totally uninspiring! Nope, that was scrapped almost as quickly as it entered my mind.

Next, I really dwelled on the skyline and school seal. I did some reading about the school and was inspired by their mission. I decided that these two things should be my main focus. So I sketched up a two-tone quilt featuring the Cleveland skyline at the top, and below, toward the center of the quilt was a large version of the school seal with the motto. I felt sure I could include the other elements, though I was lost on the Harry Potter reference having never seen any of the movies or read any of the books, and I wasn’t sure where cats would fit into the quilt. My focus was to create something both striking and cohesive. I sent over my sketch, and by that time, two other mothers joined in on the project. I’ll confess that I was feeling anxious about making so many people happy. I really aim for happy clients, and the thought of people not being happy really worried me.

They gave me some great feedback and a few other ideas. They wanted the seal to be much smaller and to nix the motto in favor of “we wish you well” which is something they say in their kindergarten classroom often. They also said the Harry Potter reference and cats could be nixed. There was a bit more back and forth that that, but finally I erased what I had previously drawn and started fresh. Cleveland is a big part of this teacher’s life. The places there are precious to her.

Okay, so that’s my focus. Definitely keep the skyline. Now to work the other ideas in. From there I felt like my previous idea was too bland- there needed to be more color and just more going on that complimented everything else as opposed to adding busyness. Having a skyline means there needs to be a sky, so I instinctively reached for the star print from Alexia Abegg’s Printshop collection. That print looks amazing just about anywhere. In this particular quilt, it was going to create a beautiful contrast to the skyline and everything below it, which I had decided needed much more variation than being straight aqua. I did toy around with several ideas and approaches to add in some variation, but in the end, I felt like what was needed to add interest and not distraction was a simple ombre style patchwork that transformed from aqua to purple. Its a natural blend of colors, and it would do just what I wanted. With the basic blueprint of the quilt drawn up, I still needed to add in the other elements. With approval from my clients, I added them naturally into the skyline. The Cleveland Indians logo, school seal, and zoo logo are colored accurately and were created with hand embroidery. I love making all those itty bitty stitches! After that I realized that those skyscrapers presented the perfect opportunity for the Harry Potter reference. I looked up the flags and seals referenced in the series, and choosing the one I thought was best, I stitched a very simple two-tone flag which I think was for Hogwarts or Slytherin (?). All that was left was the phrase “we wish you well”. While I was going to stitch that along the bottom of the skyline initially, I decided that would draw the focus to that more than the other elements, and I was really going for the most complimentary effect. So while I was stitching up the logos, I had this lightbulb moment that the way to work this in was with a plane! She loves baseball, and I certainly associate blimps and planes with messages with ball games, so those elements would work off of each other nicely. I sketched up a plane with a banner and stitched the phrase onto the banner. The plane is flying right over the ball park. 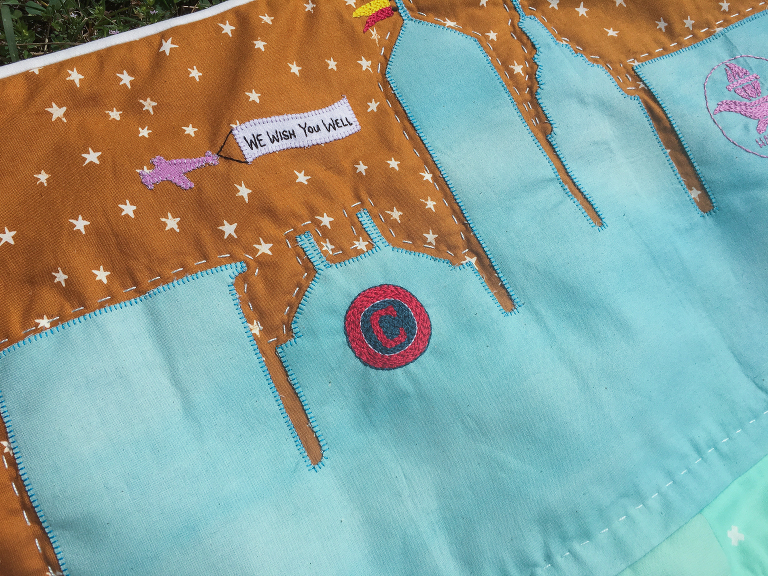 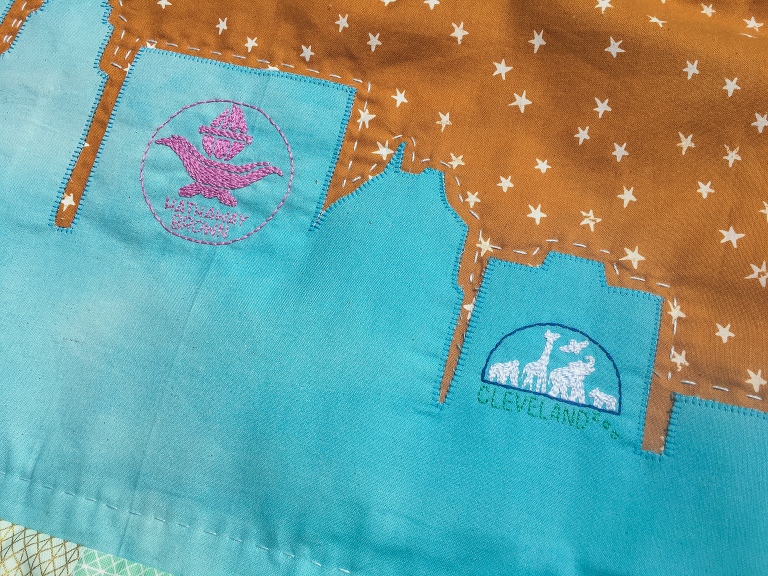 Not wanting to detract from the flow of the quilt top, I opted for some simple hand quilting that would compliment the design quietly, while still serving its utilitarian purpose of holding the layers securely together. My intention was the same for the binding- I wanted a clean, simple frame for the work, and what better way to achieve this than going with a clean white to make the quilt itself really POP? 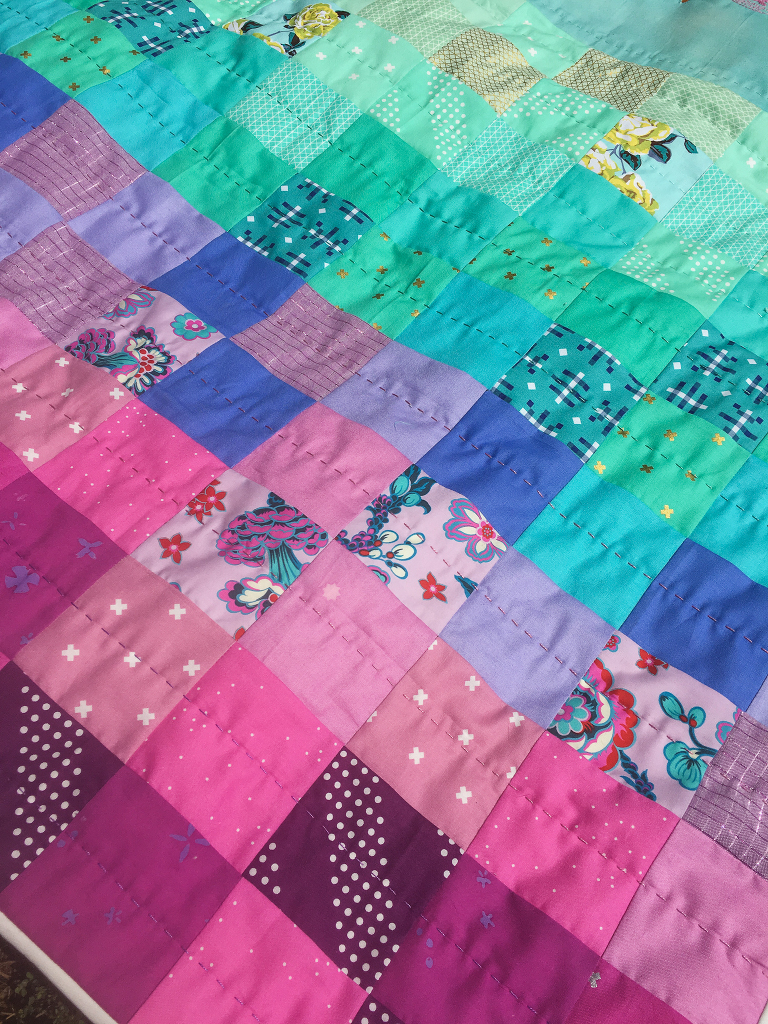 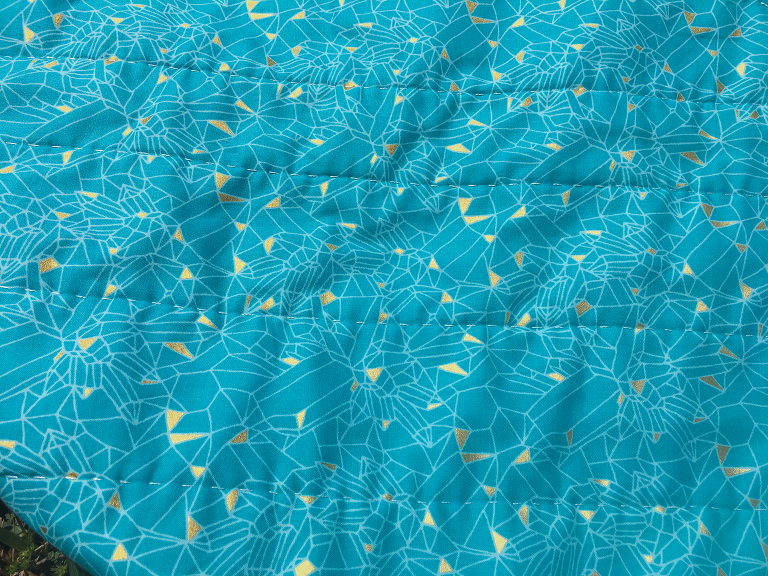 What initially drew me outside of my comfort zone and way out of the box in terms of what is traditional and what’s not, taught me once again, that wandering outside the mold to make exactly what’s in my head is so freeing and so empowering. The quilt came out exactly as it was in my head, and I don’t know if there is a feeling more gratifying that achieving what one sets out to do. 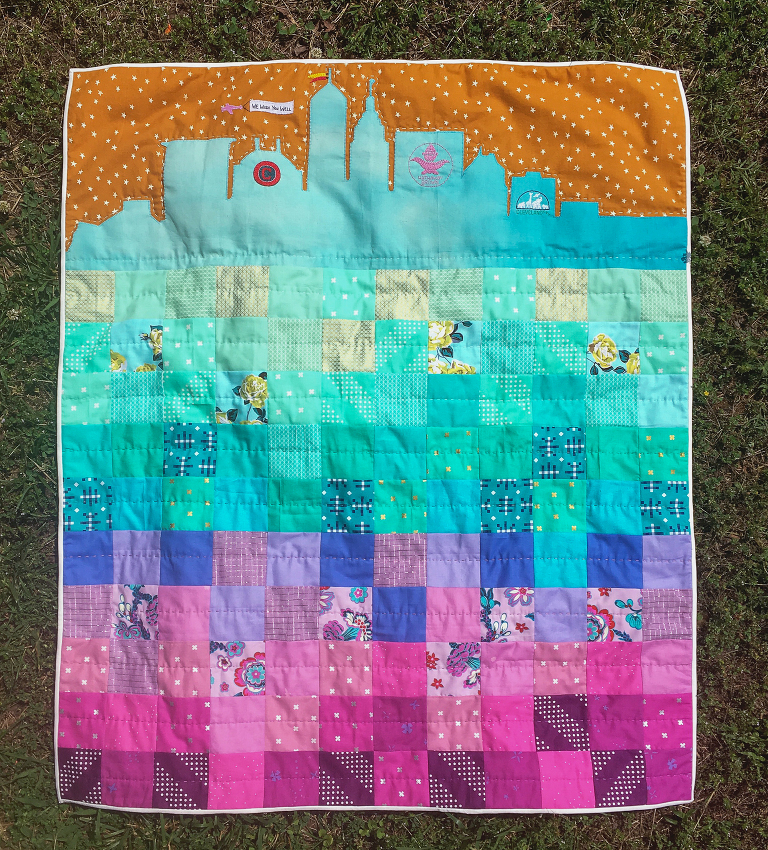 All that to say- I think everything has a place and a proper use. You don’t have to spurn tradition in order to achieve the edgy and abstract. In fact, I would argue that those methods that have worked for centuries, millenniums even, propel our visions even further and allow us the freedom to make our goals a reality. So next time you think, “can I really do this?” give yourself a quick pep talk and say, “I sure can!” It may mean failing, and that’s alright. You’ll learn something for the next time. I think hardly anything great has been achieved without the necessary failing-and-learning experience along the way! 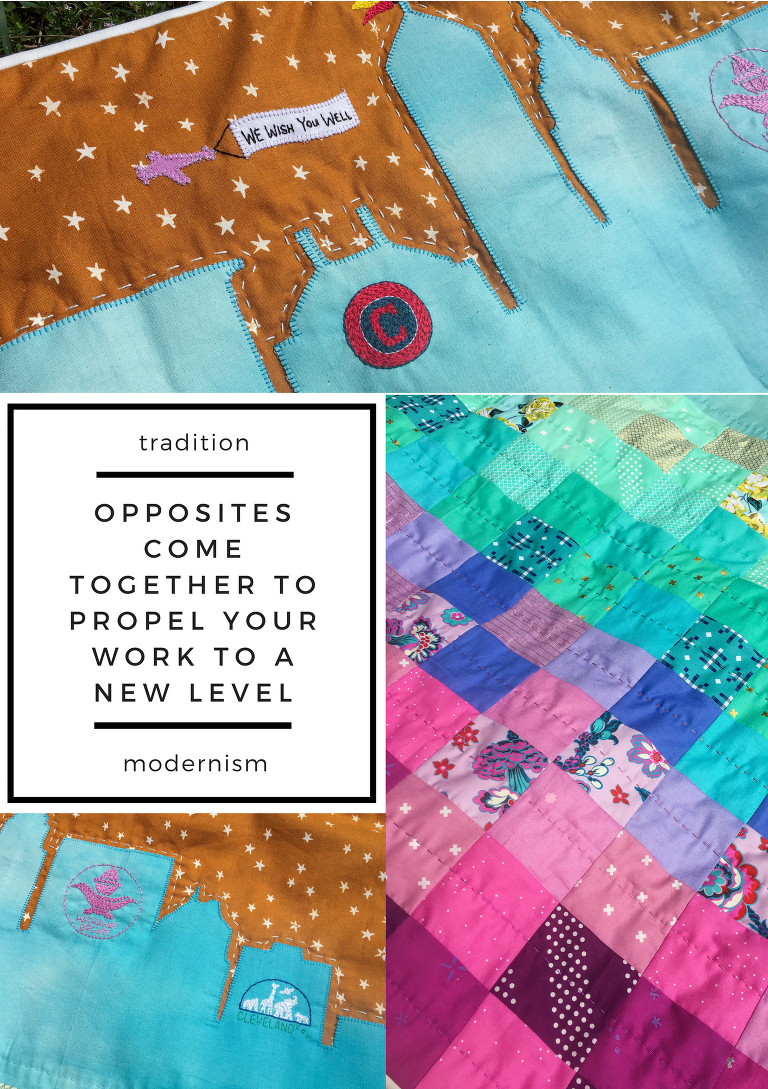