Something I’ve wanted for a while now

I told you yesterday that I went antiquing with my mom a few days ago. We had the best time! Its one of our very favorite pasttimes. We went to Arcadia where there are 24 antique shops all on one little street. We spent a while in the first store, completely impressed with the amount of stuff they had and the amount of room there was to move around. It was so nice. We then remembered all the other stores we had to cover by 3 or 4 o’clock (they closed early for New Year’s Eve), so we hurried along as best we could. I saw so many unique things! One of the highlights was stopping by Wheeler’s, a very tiny hole-in-the-wall restaurant with wonderful Southern cooking. I had ribs, fried okra, and green beans. That alone was worth the drive. By far the coolest antique store was one that had at one time been an opera house. The last date that was painted on the stage was 1906. That shop had all sorts of treasures that had simply been left there after the demise of the opera house. The next coolest store was one that used to be a bank. They had made good use of the vault, and used it as a showroom.

It was in that very bank vault that I found it. The item I have been waiting over a year for. I think I probably mentioned the couch I found when we were vacationing in North Carolina and Virginia in 2010. Well I didn’t get that one. Even though I wanted it more than anything. It just wasn’t the right time and I came to accept that, though I did find myself reminiscing about that couch and how nice it would look with new upholstery in my house.

On Saturday in that vault, I found my beautiful Victorian couch. It was the one. Only this time, I wasn’t leaving without it. Justin gave me his blessing on buying the couch of my choosing after I bought him a very pricey gun earlier this year. Now we are even. Don’t tell him, but I think I got the better end of the deal. What do you think? 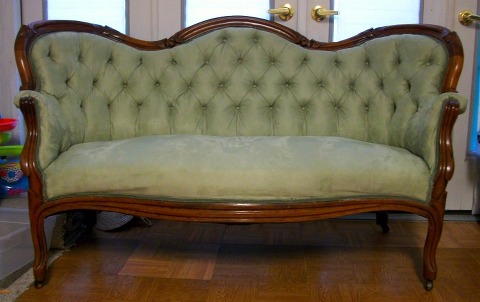 Also, my Christmas sale ends tonight in the shop. I have some really spectactular deals, so if you see something you like, be sure to get it before the day is over! Visit the shop here.

I have to get back to finishing up a quilt I planned to have completed yesterday. I’m nearly done with the handquilting, and then I’ll just have to trim it up and bind it!